Call Us: (480) 941-1707
In 1961, I was working for the United Kingdom Atomic Energy Authority in Zimbabwe, as part of a program to assess the beryl reserves of the country, when I noted that the rock types forming the upper part of a nearby range of hills were of a very different chemical composition.

I headed to the foot of the hills armed with a geological hammer and climbed towards the crest of the range. Near the top, a gray-white band of crystalline limestone cut across the gully and, as I approached it, I noticed pin fire flashes of green in the morning sunlight.

On closer inspection, I found the limestone was studded with small, green stones, some of which were euhedral. They were green garnets.

The second time I encountered a green garnet deposit was in 1967 in northern Tanzania. The deposits lay in a low range of hills lying some 30 kilometres to the south of Arusha near a small village called Komolo. These hills are a southwesterly extension of the Merelani Hills where Tanzanite had been discovered about a year previously.

The green garnets occurred under similar geological conditions to those in Zimbabwe, the principal host rocks being graphite gneiss and crystalline limestone. When I tested the garnets, I found them to be grossularite – the green imparted by traces of vanadium and chrome oxide.

I took some cut green grossulars to show Henry B. Platt, president of Tiffany and Co., who had named the blue zoisite Tanzanite in honour of its country of origin. Platt was very impressed and excited by these beautiful green garnets, and so I asked him if Tiffany would be interested in promoting this gemstone in the same way that it had promoted Tanzanite.

He responded by asking me, “How many 1-2 carat stones could you supply per month?”

I replied that I could probably supply a small handful of cut stones, in this size category.

He then asked, “How many stones of an important size (three-carats and up) could you supply per month? We have a lot of customers who like to wear important looking gemstones”.

I thought for a bit and then said, “The way production potential looks at present, it would not be a question of how many 3-carat plus stones per month that we could produce, but rather the probability of only being able to supply a few 3-carat plus stones every two to three months.”

Harry smiled. “We can’t promote a gemstone unless there is an assurance of an ongoing regular supply including impressive stones of important sizes.”

As it turned out, Tanzania’s mines were nationalised and the Komolo green garnet mine was handed over to a local co-op. Looking for a more stable investment environment, I left Tanzania and moved to Kenya.

I obtained geological maps prepared by geologists of the British colonial government and studied them to identify areas that had the kind of petrographic geology conducive to the formation of green grossularite garnet deposits.

The next step was to study aerial photographs to verify structural features such as faults and folds, both shown on the maps and to look for unmapped structures.

Three separate areas showed exceptional promise. The first that I decided to investigate lay to the south of the Taita Hills, in southeastern Kenya. I made my way along bush tracks towards the area that I wished to prospect and, just before nightfall, the low range of hills that I had chosen from the maps came into view.

As luck would have it, it was only a few hours before I found my first few pieces of green garnet at the base of an ant heap out of which they had probably been weathered. 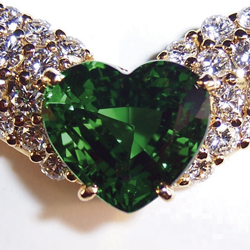 A pendant set with a 3.5-carat Tsavorite heart set in 18 carat gold, and pavé diamonds.

These termites often bring fragments of stones to the surface from several tens of feet depth in their search for the water table. This was enough to encourage me to set up a field camp with a small team. We set about systematic traversing across the strike of the rock horizons looking for indications of green garnet deposits that might prove to be economic. It was my wife Judy who actually picked up the first substantial piece of gem green grossularite, with the shout of, “Eureka!” on a low hill that we were later to name GG1.

When she called me over, I was able to find a few more pieces. Having found a number of pieces within a relatively small area, the likelihood was that a green grossularite lode existed nearby. This proved to be the case and we opened the GG1 mine to be followed by GG2, Treehouse Hill Deposit, GG3 or ‘Elephant Skull Mine’ and, finally, the ‘Scorpion Mine’ – which was the richest of all and which we mine at the present time.

In early 1974, Henry Platt decided that this beautiful green garnet needed to be given a trade name that, in keeping with scientific mineralogical nomenclature, had to end in an ‘ite’.

We finally decided to name it after the nearby Tsavo National Park, famous for its great elephants, hence the name, Tsavorite.

Henry Platt was so taken with Tsavorite that he chose to carry out a small promotion in 1974 by featuring ads in the New Yorker magazine and newspaper articles to announce its arrival to the jewellery-buying public. “Tsavorite has all those fine qualities that one expects of a gemstone, and then some,” he said. “It is truly beautiful.”

Tsavorite is still a fraction of the price of an equivalent-quality emerald, even though it has superior qualities. Tsavorite’s relatively recent discovery and availability in limited quantities have not given it the necessary exposure that emerald has enjoyed over the past several thousand years.

The classical concept that a gemstone has to be beautiful, durable and rare to obtain high value is fallacious in that as Platt and Liddicoat, both giants in their fields, summed up: a gemstone must be found in sufficient quantities and larger sizes on a regular basis to enable jewellers to promote it, thereby creating awareness.

Already some knowledgeable connoisseurs, cutters and jewellery manufacturers have recognized the fact that, as Tsavorite is isotropic, it does not have to be orientated as does dichroic Emerald in order to obtain the best colour in the table. Tsavorite is also not as brittle as emerald. These factors make it both easier to cut and less hazardous to set. In addition, Tsavorite is not oiled or artificially enhanced.

Put all the above factors together and you have a sure winner. Supply is the key and this is being addressed as more prospectors search for new deposits. Meanwhile, current miners of Tsavorite, increasingly realising the stone’s potential, are stepping up their production efforts.

It is apparent that once sufficient quantities of Tsavorite are available to promote this wonderful green gemstone to the general public, demand should go through the roof and prices will increase accordingly.